The Powerwall is solar storage in the form of a  7 kilowatt hour (kWh) lithium-ion-battery system and allows people who already have solar panels to store their generated power and use this power at different times rather than exporting it to “the grid”, the energy distribution network that carries electricity from power stations to homes and businesses. The system will system that store electricity generated from rooftop solar panels during the day so that electricity can be used at night during the peak-usage times. 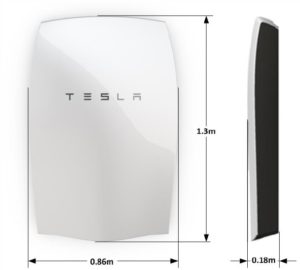 The efficiency of the 7 kilowatt hour battery is 92%, so although it has a 7kWh capacity, the Powerwall’s working capacity is more like 6.4kWh.

Tesla also has a 10kWh weekly cycle version that is intended for back-up applications, but the 7kWh is the variant most commonly used for home installations.

Tesla is not only marketing the Powerwall to solar panel owners. They have stated that they can offer it to households without solar so they can take advantage of off-peak electricity prices. The idea here is to charge the battery during off-peak times using your standard home power, and then use this stored electricity during peak times. This is known as load-shifting but it doesn’t make as much financial sense as teaming the Powerwall with solar panels.

With the rising cost of energy consistently rating as a top concern and with 44% of consumers stating don’t trust energy providers, and recent surveys showing almost two-thirds of Australians want to be self-sufficient in meeting their energy needs. The bulk of a household’s electricity bill is tied up with network costs and electricity prices. While battery storage systems, depending on their size may not give complete independence for most people, they do offer a bit more control and relief from rising power costs. Also importantly there is the added benefit to the environment of investing in a grid connected solar system with battery storage.

Below is footage from Tesla’s announcement of the Powerwall.


Utilising a Powerwall has really paid off for many people around the world and in Australia. To read more about the savings provided by solar batteries click here.