Hybrid systems or grid-connect PV systems with battery back-up are becoming increasingly popular. With new solar system owners in many states now receiving a low price for electricity sold back to the grid, battery back-up systems can be a viable alternative as they use the electricity stored during the day to run your house at night. They also have the advantage of being able to supply power during power outages.

Hybrid systems are becoming increasingly popular today as is the retro fitting of battery storage to existing grid connected solar power systems. Battery storage growth is accelerating in many states because of the low monthly return on electricity being sold back to the grid (ie a low feed in tariff). A battery-back up system allows storage of any excess electricity generated during the day while the sun shines brightly rather than just exporting this power back to the grid for a low feed in tariff. This is now a viable option because of the ability to use the excess power at night when power from the grid is more expensive instead of selling it back to the gird during the day for a low profit (with current low feed in tariffs). Also an advantage during power outages when other households are left without power, hybrid system owners have power in storage available for use.

Hybrid solar systems provide home owners with not only clean energy but also savings on their power bill and peace of mind. Not only are you still connected to the grid and electricity is to be drawn from the grid when needed, hybrid solar system customer also have the ability to use stored power from their systems batteries during blackouts while others cannot.

The ability to utilize a storage solution while connecting to the grid provides the ultimate flexibility a homeowner needs. Using the stored electricity means that a homeowner will forgo his or her low feed-in tariff (FIT). FITs are the payments for being able to generate your own electricity. Basically cashback for generating your own renewable electricity and selling it back to the grid. The hybrid systems allows you to utilize your electricity instead of having to buy electricity from the grid at a higher price. Hybrid solar system customers have a distinct advantage over generic electricity customers because they have a combination of energy sources to choose from and may choose what will work best for them economically at the time. This reduces their grid electric usage and provides them with better reliability over all. A combination of systems is the ultimate advantage.

The most important benefit of a hybrid solar system is that during a blackout after a grid failure, your system can pick up where the grid left off. Your system will disconnect from the grid and utilize your battery stored energy. A standard grid connected solar system will shut down during a blackout; however, hybrid systems differ in that you can continue running from your backup or solar panels during daylight hours. This means that you essential have an uninterruptible power supply.

The second most important benefit of a hybrid solar system is the ability to load shift or time shift. Meaning you will never waste electricity. You have the ability to store your energy and use it at night instead of paying for electricity (generally at a higher rate at night) or having to sell your excess it back to the grid for a minimal payment. The graph below shows how load-shifting works. 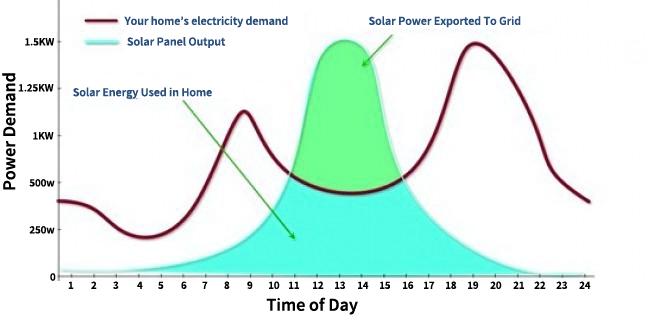 The third most important benefit of a hybrid solar system is the ability to program your system. This means that if the hybrid systems does not have the ability to supply your daytime load and charge your batteries at the same time, the system will wait for a lower off-peak rate and charge the batteries at that time. It is fully customisable to fit your needs. For example, if your usage hits a specific level rather than draw from the grid, your batteries will pick up the load automatically. Hybrid systems have the ability to be set up  in such a way to maximise your financial benefits. This programming is all done by your installer and the system monitors usage, power generation and adjusts as required. The main point here is to understand your when your household consumption at its maximum and time of day that maximum energy is generated. exported. This will help you understand and select, in conjunction with your installer, the system that is right for you.

A Hybrid Solar System includes the following solar equipment: photovoltaic solar panels, a grid tied inverter, a battery bank and an inverter/charger. The diagram below will show you how the system should be set up. The great thing about a solar power system like this is that it can actually double your self-generated power consumption. By increasing the amount of self generated power you use you decrease the amount of power you draw from the grid. When you draw less power from the grid  the amount of money saved on your power bill in increased.

The most important aspect is recharging the batteries so that they can carry load until late in the evening when power costs and household consumption are highest. Remember early evening is when everyone is just coming home from work and the need for power kicks into overdrive. The system will use your batteries then! With a hybrid system the cost savings will be through the roof due to utilizing your batteries at the right time of the day. 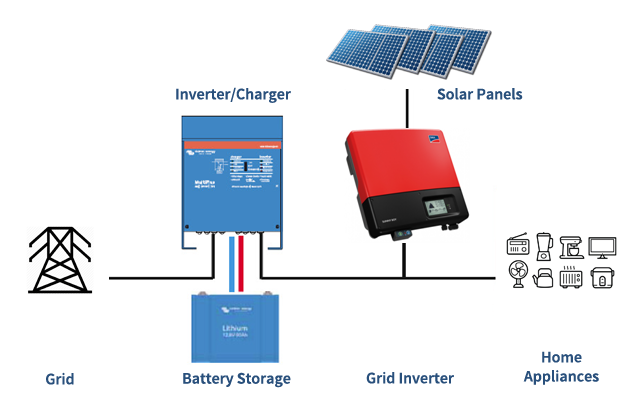 With a hybrid system the initial investment will be more than a simple grid connect system, but your investment pays off overtime due to increased savings. Battery storage technology is improving and the reduction in prices is getting better all the time. A hybrid system like the one show above will be able to deliver enough power to satisfy the electricity needs of your home during the day while the sun is out. At the same time your batteries will be charging allowing you to use the power from batteries into the evening. And the system will always export any excess power to the grid so you sell back any excess and receive a feed in tariff. If your batteries are fully charged any excess will always be exported back to the grid for a feed in tariff (FIT).

Let’s assume that the hybrid system has been running off the power stored in its batteries during the night with a 230AC generated by the inverter and charger shown in the image above. Just before daylight the solar panels are not active with output because the inverters are inactive. Understand that the inverter is connected to the grid and is adjusted to supply power to the household via the grid. The inverter is set up to constantly adjust its output so that it is identical to the utility grid voltage. By doing so power is either being exported to or from the grid, but the power meter has no flow.

Once the sun starts to come up the panels will start to produce power. When this happens, the inverters will activate and start to synchronise to the grid. This causes the output voltage to adjust and match the utility grid voltage allowing all power to flow to the household. During this time there will be no power being sent to or from the grid. As more power from the panels is produced the inverters will rise causing less power to be needed from the batteries. As this happens the batteries will begin to be recharged. The inverters output voltage is continuously checked and monitored so that it does not receive any power from the grid. If any excess power is generated it is sent to the batteries for storage. When the power generated by the solar panels meets and exceeds the needs of the household consumption and the batteries are fully charged, the output from the inverters will be sent to the grid for a feed in tariff. At this point the AC voltage output will begin to reduce to keep the grid-feed limit within its permitted limit.

Throughout the day the solar panels on the house will begin to produce more energy hitting its peak output and then towards the end of the day the panel’s output will decline as the sun starts to go down. The grid-feed will reduce and the house’s power needs are supplied via the panels while the batteries are charged. As the panels fall below the household load requirements the inverter/charger is then switched into inverter mode from charger mode and power is drawn from the batteries instead.

At this time the power drawn from the batteries is the difference in power being generated and the demand from the house. Once the sun has set and there is no power output from the solar panels, the power supplied to the house is provided by the fully by the battery storage. Reducing the need to draw power from the grid at a time that is most costly to do so.

If  the batteries were not fully charged due to lower output from the solar panels because of an overcast or rainy day and the household demand is in excess of what the batteries can supply and it gets to the point that power is needed from the grid, the inverter will be switched off and load will be provided from the grid instead.

Then the next day as power is available from the PV panels, the inverter/charger will be switched on and charging of batteries will begin again once there is enough output to charge the batteries and provide power to the house.

The below video shows the real world saving that a hybrid solar power system can provide.

To read about the other types of solar power system options for your house or business click here.